I’ve heard a lot of awful stories about men who leave women when they become ill, specifically women with endometriosis. Many women think that they’ll never find a mate because of endo, and the sad part is that they have good reason to worry. Endometriosis is a disease that affects a woman’s ability to have sex and have kids. So it’s easy to think “Of course no man would want me.” I think most people believe in love and seek meaningful relationships, but a lot of it still hinges on sex, doesn’t it? Relationships aren’t all about sex, but throw in an incurable illness (with no known cause) that causes sex to become difficult – not even impossible, just difficult – and all that love fluff tends to get thrown out the window.

I know a woman who was happily married for a very long time. Her husband was a devoted caretaker, and very patient with her pain and depression. From the outside, she looked like one of the lucky ones. Then he asked for a divorce. She was too sick, and he wanted his own life.

I met another woman who was married somewhat happily, except that she had endometriosis, and when sex was difficult, he sought it outside the marriage.

My husband and I are reading the book “Love and Respect,” and recently came across this quote:

The outlook is often bleak, especially to unmarried women who receive a forever-diagnosis. I was engaged when I was diagnosed, and the first talk I had with my husband was the “It’s okay if you want to call it off now” talk. It just seemed like the right thing to do. It just seemed inevitable.

But I have a theory about men. It’s generalized, and it’s just my opinion, but I feel like it was mostly proven by the tragic events that unfolded on July 20th, 2012 in Aurora, Colorado.

I believe that men, for the most part, are good. Men are loyal. Men are protectors.

I even believe that the man who left his ailing wife, and the man who sought a sexual partner in addition to his wife, are both good men who would die for their wives.

But they left them! You say. Well hear me out.

When a gunman entered the midnight screening of the premier of The Dark Night Rises, and opened fire on an unarmed crowd in the dark in the middle of the night, it was like shooting fish in a barrel. They had no time to think, nothing to defend themselves with, and no safe way out. 70 people were injured. 12 people died. 3 of the men killed died protecting their girlfriends. Not wives, not fiances, their girlfriends. And it’s not like they had a minute to think “Hold on, is she worth my life? Are we going to get married or have kids? Am I ready for this kind of commitment?” No. They were on a date. Zoned out, watching a movie. Shots were fired, and they took action.

On 9/11, business men and women were evacuating the twin towers via stairwell. I can imagine the chaos in those little corridors as thousands fled for their lives. This year, I saw an interview with one of the firemen as he recalled the things he did and saw that day. He said many of the men who emerged from the towers came carrying women in high heels. These women weren’t being stupid, they just ran for their lives. Once they realized the heels were going to be a problem, they could have wasted precious seconds to get free of them. But instead, in many, many instances, the man behind them simply scooped them up and kept running.

These are stories of men who risked everything and in some cases, gave all for the sake of a woman. In some cases a signifigant other, in others, a stranger. But there are even younger men who, without thinking, have made the same sacrifice.

On Valentines day in 2008, a student went to his girlfriend’s class to sit with her because it was Valentines day. That’s already pretty sweet, giving up an hour of your day to be in the vicinity of your girlfriend during a boring class. But someone opened fire. He wasn’t even supposed to be there, but still, without thinking, pulled her to the ground and shielded her with his body. They were shot – one bullet that went through both of them – but she lived.

All of these men are heroes. But I don’t think it’s particularly extraordinary. I think that in any snap-judgment situation, it is in most men’s nature to protect rather than run.

Life is somehow more complicated, though. When looking at life with a woman in pain, it’s easy for a man to reason out how he has more potential on his own, or that he could find a more fit and able mate, so he leaves. Again, I think this is a society thing. Many men say “I love her, but…” what they’re thinking about is money, sex, success, everything that life today says we’re supposed to be thinking about.

Yes, there are some scumballs out there. I know a couple. There are men who would sooner throw their wife in front of a bullet than take one for her. There are women who care about nothing but themselves, and take advantage of men’s desire to protect. There are perfectly happy couples with no men and vice-versa. But I really believe that most men have this trait, this protector-instinct, that goes all the way back to the hunter/gatherer days.

Nobody really questions that women are born caretakers, and that any wife or mother would fight and die for her family. Most people also agree that any woman would stay by the bedside of any person she loves – husband, child, friend. And it’s equally accepted that men should be freer, should “sow their wild oats,” and all of that nonsense.

What I’m getting at is this: Men, if your wife/girlfriend becomes ill in some way, please think of two things: One, if, God forbid, someone opened fire somewhere and you could shield her, would you? Two, when you have grown old, if you become physically disabled or succumb to Alzheimer’s, would she take care of you?

I know it’s hard. Heck, sans illness marriage is hard. So many people fail. Those people want a happily ever after, but that’s not what marriage is. Marriage is the once upon a time. If it’s not illness, it will be something else. Change will come, hard times will find you. You and your wife will both change and grow. You may become poor. You may become rich. You will fight. You will disagree. You will both be mean and nasty and you will hurt each other more deeply than anyone else can. That’s only because you love each other. If you didn’t, you wouldn’t care what the other did or said. So whatever it is, when it comes, try and put yourself in that primal, snap-judgment place. A gun is pointed at her. You could be in the middle of a huge fight, but when it comes down to it, in your very core, I believe you would still try to save her.

That you would be willing to give up your life, yet not willing to spend your life helping her…this is a great paradox.

And this goes both ways, but for the sake of simplicity I’m not going to be obsessively PC and write men/women or that SUPER annoying s/he every time. But when considering any problem in your relationship, women too should look to the future and see that “together forever” means old age and probably illness. That any day, a gun could be pointed at your man’s head, and you may have a chance to save him (if he doesn’t jump on you first).

The world is a dark place. People shoot first graders at their desks. Kids bring guns to school. Entire organizations of people conspire to spread terror and take as many lives as possible. And illness is very similar – it shoots without bias at young and old, rich or poor, loved or lonely. Hold on to each other. Give your heart fully to your partner, your friends, and your family. Tragedy reveals our inmost character, and with each new act of senseless violence, the masses have risen and shown us that there is a hero in each of us. In our chests beats the hearts of lions. When bombs go off, huge crowds of strangers run towards it. As Mr. Rogers so famously said, we are all helpers. 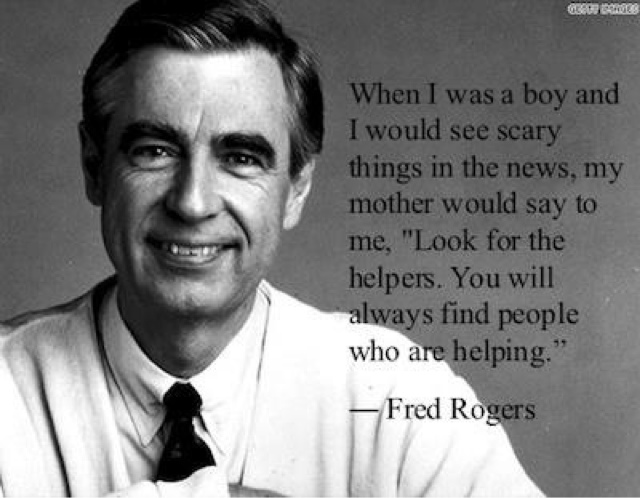 The world makes me sad. The hearts of men keep me hopeful.

19 thoughts on “The Hearts of Men”