We all know that friendship is the surest way to overcome any evil, but did you know that it also affects the way you experience pain? There have been a lot of studies done on this topic, with fascinating results.

Now, I’m not saying any of you doubt that friendship is magic, but in case any non-believers happen upon this post, here are three studies that show the effects of social companions on the experience of pain.

In 2017, researchers at the University of Colorado, Boulder conducted a study with 22 heterosexual couples. Each couple had been together for at least one year, and fell between the ages of 23 and 32. During the experiment, both partners had their brain waves monitored using an electroencephalograph, or EEG. You know, similar to how they monitored Eleven in Stranger Things.

Some of the couples sat together in the same room without touching, some were asked to hold hands, and some were in separate rooms. The women were all subjected to mild heat-induced pain on their arms (because patriarchy, of course).

The study found that the women who held their partners hand experienced the lowest pain levels, but even just being in the same room was enough to lower the intensity of the pain experience.

The study also tested the partners’ levels of empathy through a simple questionnaire, and found that the male partners with higher empathy scores had even more of an impact on the female partners’ pain experience.

You can read more about that study here.

Since this was a small study, I’m also going to include a quick blurb on a ***bonus study*** from 2006. It was a similar premise, with heterosexual couples and the women experiencing small electric shocks (again, we obviously can’t hurt men for science when there’s the option to hurt women!). Some held their spouse’s hand, some held a stranger’s hand, and some were alone. The women who held their spouse’s hand found the pain less unpleasant than the other groups.

You can find out more about that study here.

I’ll Be There For You

A newer study from 2019 took a more equal opportunity look at the relationship between empathy and pain. This one comes from a collaboration between researchers from Austria and Spain.

Once again, the study focused on heterosexual pairs. This group had an average age of about 25, and the partners had been together for an average of about 3 years. Participants filled out questionnaires to give them each an empathy rating.

And I know it’s a bummer that this study is only on heterosexual couples, but at least this time both genders were studied equally. Progress?

In this scenario, each participant was exposed to “pressure pain” under two different conditions: once in the presence of their partner, and once alone. Observing partners were asked to remain entirely passive, and not touch or speak to their partner during the experiment.

This time, the results were measured using a pressure algometer. I don’t actually know anything about those but here’s a picture of one: 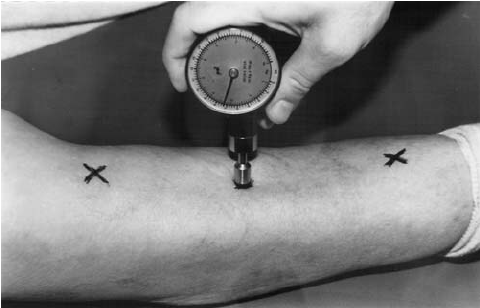 This time, they found that both men and women were more resilient to pain when they were in the company of their romantic partner. And, of course, the members with the highest empathy rating provided the most pain relief, even when they were being totally passive.

This set up specifically shows that romantic bonding alleviates pain, not just nursing behaviors like talking and hand-holding. The bond’s mere existence is enough to affect the physical sensation.

You can read more about this study here.

Of Mice and Morphine

I saved the oldest study for last because, unfortunately, I do need to put a disclaimer/trigger warning on it: This study is controversial because… let’s just say it was not the most humane experiment ever conducted. Scientists inflicted pain on animals and that is morally upsetting. This study is from 1998, the mice aren’t around anymore (I assume), and it’s in the past. We can’t undo what was done. But we can look at the results of the testing and learn from it, and maybe in that way this mousey injustice won’t have been in vain.

This study comes out of Italy, specifically the Instituto di Psicobiologia e Psicofarmacologia del CNR if you want a place to boycott or cancel or something.

There were a few interesting results from this experiment. First, the anesthesia was more effective in the mice that got to hang out with family, even in mice that had been under-dosed with morphine. But that wasn’t the only benefit that the group allowed to socialize with their kin experienced. Adverse side-effects of morphine, such as respiratory distress, occurred much less frequently, and symptoms associated with withdrawl/addiction were also rarer.

You can read more about this study here.

(This reminds me of the study on addiction that was done on mice that showed that mice that had strong social groups wouldn’t get addicted to heroin, even if it was freely available to them. Conversely, mice in isolation would overdose and die. It’s pretty interesting, you can read more about that here.)

There is an undeniable connection between our social bonds and our physical health. That’s why babies only want their mommies when they get a bump or a bruise. That’s why someone is always supposed to hold hands with a woman in labor (my husband, sister, and mom took shifts for me). And it’s why just sitting with someone who’s having a hard time is actually helpful.

Human connection is potent– or, as some very vibrant ponies put it: Friendship is magic.

So the next time you’re having a painful procedure done, or some unpleasant dental work, or even just donating blood, bring along your favorite person. You’re not being needy, you’re doing science!